The wolf shall dwell with lamb

And the leopard shall lie down

With the kid; and the calf and the

Young lion and the fatling together,

And a little child shall lead them.

Human longing for a “peaceable kingdom” hasn’t ceased since the seventh century,   B. C. when the prophet Isaiah uttered those words. The idea has had particularly strong appeal among certain groups of people, such as, for example, the Quakers, with their history and tradition of pacifism. Edward Hicks (1780 -1849) a Quaker minister and naive artist, painted no fewer than 62 pictures portraying the scene suggested by Isaiah’s vision. 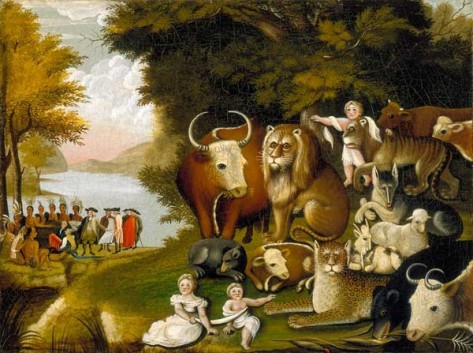 Another group inspired by visions of a pastoral utopia were the Transcendentalists in 19th century New England. Not content with mere depictions, some of those Transcendentalists actually attempted to found communal agricultural colonies. Brook Farm, founded in West Roxbury, Massachusetts in 1841, is probably the best known. Among that colony’s founding members was Nathaniel Hawthorne, whose novel The Blithedale Romance draws upon the author’s experience of life in the colony.

Brook Farm failed in 1847, but another such experiment, also in Massachusetts, was even shorter-lived. Named Fruitlands, it’s now a museum. It lasted a mere seven months; but during that brief time it housed an 11-year-old girl who was destined to become another famous American writer. That girl was Louisa May Alcott. 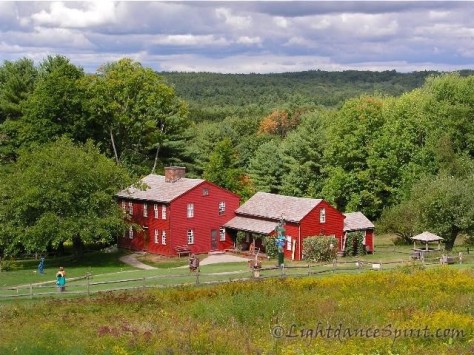 In some of his 62 paintings of “The Peaceable Kingdom,” Edward Hicks deviated slightly from scripture by having the lamb lie down with a lion rather than a wolf. Louisa May Alcott did likewise in her satirical sketch of Fruitlands, written some 30 years after her childhood sojourn there. One of Fruitlands’ two principal founders was Charles Lane, whom Alcott renames “Timon Lion” in her sketch, titled Transcendental Wild Oats. Her model for “Abel Lamb” is her own father, Bronson Alcott, Fruitlands’ other principal founder, whom Louisa May depicts as an ineffectual dreamer, dominated by Lane’s more forceful personality.

Alcott has great fun mocking her father and his bookish, intellectual colleagues who know nothing about farming and who furthermore are unfit for the physical rigors of farm life. In her satire, as in reality, it was the women who provided such practicality as the colony experienced. The following excerpt will serve to illustrate:

“About the same time the grain was ready to house, some call of the Oversoul wafted all the men away. An easterly storm was coming up and the yellow stacks were sure to be ruined. Then Sister Hope gathered her forces. Three little girls, one boy (Timon’s son) and herself, harnessed to clothes-baskets and Russia-linen sheets, were the only teams she could command; but with these poor appliances the indomitable woman got in the grain and saved food for her young, with the instinct and energy of a mother-bird with a brood of hungry nestlings to feed.”

Despite such heroics, the first year’s crop yield was insufficient to see the colony through the winter, and so it disbanded. Charles Lane joined a Shaker colony. Bronson Alcott was devastated. Recalling his pain, Louisa May drops her satirical tone and reflects on how unforgiving conventional society can be.

One thought on “Transcendental Wild Oats”