December 21, 2017.  Depending upon where you live, this was the shortest of days or it was the longest of days.  The Northern Hemisphere’s winter solstice and the Southern Hemisphere’s summer solstice occurred on this day, as they do every December.  In June of each year the situation is reversed with the start of summer in the North and winter in the South.   The halfway points between these two solstice events are the March and September “equinoxes” when, for a day or so, both hemispheres receive the same amount of sunlight (hence the word “equinox” or equal  night).

How can this be?  Well, the story begins a long time ago when there were no solstices and every day of the year was an equinox.  About 5 billion years ago, when our solar system first formed from a rotating cloud of gas and dust, the young Earth’s axis of rotation was perpendicular to its orbital plane.  This assured that the sun was always directly above Earth’s equator as the planet rotated on its axis.  Every spot on Earth experienced 12 hours of sunlight and 12 hours of darkness every day of the year.

Then, about 4 to 4.5 billion years ago, there is scientific consensus that an event occurred that changed all that when a Mars-sized proto-planet collided with Earth.  This monumental event not only created our moon (another story), but the impact forced Earth’s axis to tilt away from the vertical by about 23.5 degrees.  Suddenly, the rotating Earth began to experience “seasons” as the amount of sunlight reaching each spot on the planet’s surface now varied from day to day and month to month.  Picture the North Pole now tilting away from the sun during the Northern Hemisphere’s winter solstice and towards the sun 6 months later during the summer solstice.  Of course, the reverse is true for the Southern Hemisphere.

Since Earth’s axis tilt never changes its orientation as the planet orbits the sun, this also means that there are two days each year (the March and September equinoxes) when the poles are equidistant from the sun.  The axis is still tilted 23.5 degrees but neither pole tilts toward or away from the sun (see the diagram below). 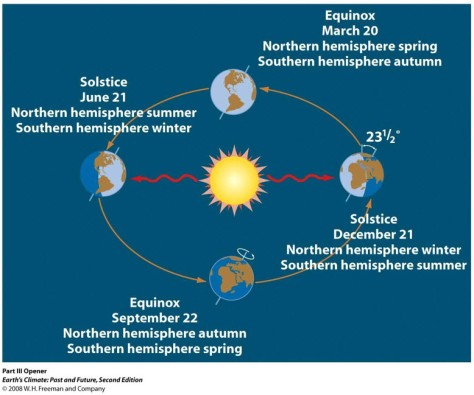 Another result of Earth’s axis tilt is the need to recognize two new global latitude lines – the “tropics”.  The Tropic of Capricorn circles the globe at about 23.5 degrees South of the equator and marks the lowest point (as viewed from the Northern Hemisphere) of the sun’s apparent path across the winter sky.  This is where the sun stops its southward progression and starts to move northward again on the day we call the Northern Hemisphere’s winter solstice.

“Solstice” is a Middle English word derived from the Latin “sol” (sun) and “stit” (stopped).

At approximately 23.5 degrees North latitude, the Tropic of Cancer fulfills this role for the Northern Hemisphere’s summer solstice when the sun stops its northward movement and heads southward again.  Again, the opposite holds true in both cases for the Southern Hemisphere.

Complicated, yes, but what would our home planet be like without seasons?

Incidentally, and counter-intuitively, because of Earth’s elliptical orbit around the sun, we are actually two or three million miles closer to the sun in January than we are in July.  However, being a bit closer to the sun during winter in the Northern Hemisphere is more than offset by the effect of the tilt in Earth’s axis as described above.

Note:  My use of the word “sunlight” throughout these musings implies the entire electromagnetic spectrum of the sun’s radiation that reaches Earth and not just the light we can see.

We hope you enjoy this OLLI “commercial,” presented by the OLLI Readers Theatre Special Interest Group! The group gets together twice a month to perform scripts such as old radio shows, drama, comedy, and their own creations, such as this video. Enjoy!

OLLI staff took some time to create — in our opinion — the best Halloween pumpkin ever!  We enter it tomorrow in the McKimmon Center’s annual pumpkin carving contest. Since votes are determined by McKimmon Center clients, we’re hoping for a strong showing from OLLI members!  But look at the pumpkin more closely, and you’ll see reflection of the OLLI at NC State spirit — a love of learning and a sense of fun and community!  If you are in the building on Thursday, October 27, please vote! 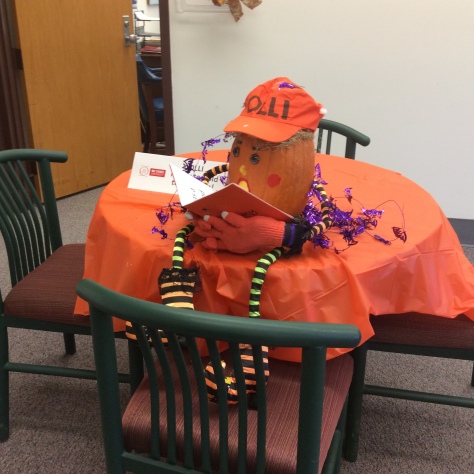 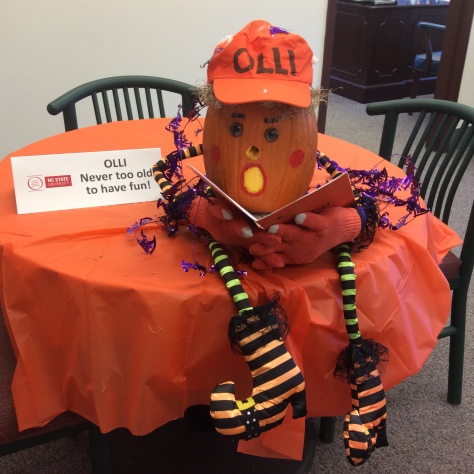